With 5 weeks to go until the big day, the training seems to be going to plan. Two long runs in week week 8 of 12 miles and 18.  The 18 was quite an experience as the weather forecast was rain and high winds so I decided to get out early and get it done. With the knowledge of the strong winds I chose a route that would be inland to be more sheltered  rather than on the seafront. How wrong was I! it did not make a huge difference,  5 miles in it started to pour with rain, the route out was  fine with the wind behind me, until I got to the point where there was no path just road and a very uneven verge, I spent a good two miles dodging cars speeding by and spraying me with water. I was happy now soaked through and the turn point was now back into a strong head wind, the legs were now feeling like lead weights and I felt like I was running backwards! I just put my head down and tried to get into a rhythm of sorts. Got to say this was probably the worst run ever, I started to feel extremely cold and my hands had no feeling. I just wanted to make it home. I had no idea how I got to my front door and by the end  of the run I was delirious, it took me a good 5 minutes to get the keys in the door as my hands were frozen!  That for me was like climbing a mountain and not one I would want to repeat.

The following week was a lot easier I had a a few days off which felt strange but welcomed the rest, had a treatment and by the end of the week felt a lot more refreshed and ready to finish the Sunday League XC season.The AC had a big team out with both first male and female home on the day along with  winners in many categories over the 6 races of the season, including a second for me in my age category!

This week has been all about preparing for the Hastings Half Marathon this weekend. Having run most of the week to get back in the swing of the training, was feeling a little lethargic to begin with but feeling good by the end of the week. I have decided not to have any specific goal for tomorrows race as it difficult not to have expectations, especially on your home turf. For me it is about the bigger picture, London!  not put too much pressure on myself which is an inherent problem for me in races! There will be a lots of great performances tomorrow from team AC and it will be a brilliant day and that is what its ultimately all about!

Thanks for all your donations so far, it is really appreciated! If you want to donate to either of the charities then please follow the link. https://www.justgiving.com/account/teams/rizmaslen 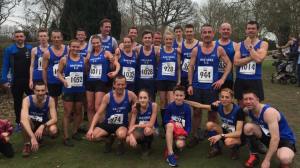